Version for the visually impaired

Sestroretsk's municipal emblem was approved by the decision Nr.148 of Sestroretsk Municipal council of February, 23 th, 2000. The emblem was included into the State heraldic register of the Russian Federation under number 607. 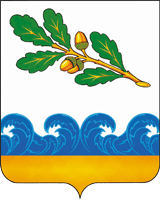 Description of the emblem of Sestroretsk municipal formation

«In a silver background there is a gold oak branch with green leaves and gold acorns in green cups representing a sort of a belt; the gold extremity is bordered by azure (dark blue, blue) in the form of rough waves running from the middle to the sides».

Symbolics of the emblem

The geographical location of the city between waters of Finnish Gulf and the lake Sestroretskiy Razliv represented by colliding waves became a basis for the emblem.

The composition built of oak leaves and waves harmoniously and clearly reflects the city as the largest resort in Baltic, due to its soft climate, picturesque surroundings, sandy beaches and freshness of Finnish Gulf.

Oak leaves also symbolize the city park «Dubki» («Oaklets») laid out in 1714 by Peter I who was the age-mate of the city.

The emblem harmoniously reflects the city location, its history and general directions of its modern activities by means of language of allegories and heraldic symbols.